The Story of Gelert

Many years ago, in a castle deep in the rugged mountains of Eryri, in the county of Gwynedd, lived a brave and well respected prince called Llewelyn. This prince loved to hunt and his favourite hunting dog was a faithful and fearless hound called Gelert. Gelert accompanied Llewelyn everywhere and was always to be found at the head of the pack. No game was too big, too strong or too fierce for Gelert, whose bravery knew no bounds. 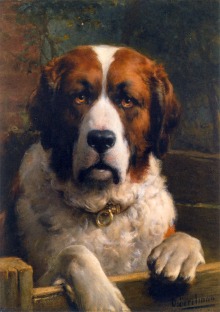 This prince had a beloved son, a swaddling babe whose mother had died in childbirth. Llewelyn had loved his wife dearly and been broken hearted by her death. His only consolation had been his son. On her death-bed, Llewelyn had promised his wife that he would cherish the boy and this he did.He looked forward to the day when the two of them could ride out together, tracking the wolves and the other wild animals found in the ancient hills and the dark forests of Gwynedd in those far off days.

One day, Llewelyn and his men were preparing to go out hunting. The baby lay fast asleep in his cradle, his nurse in attendance nearby. The day was cold and damp but a huge log fire blazed in the bedchamber and the cradle was covered with warm furs. The baby was safe and snug. Nevertheless, Llewelyn decided to leave his loyal hound, Gelert to protect the homestead. As he left he gently stroked the dog’s huge, shaggy head.

Gelert’s tail thumped the ground slowly and his eyes remained on his master’s face until Llewelyn softly closed the door behind him.

It was late when the prince returned home. He was tired but victorious. A sumptuous feast was being prepared and he strode through the great hall towards the bedchamber, eager to see his son and relax in front of the great fire.

But as he entered the room he beheld a terrible sight. Furniture lay upturned, tapestries had been ripped from their hangings and the baby’s cradle lay empty on the floor. The luxurious furs that had previously covered the cradle lay scattered nearby, torn to shreds and smeared with blood.

As Llewelyn stood rooted to the spot, he felt a soft, warm, velvety nose nuzzle the palm of his hand. He looked down to see Gelert’s trusting eyes gazing up at him. The dog looked exhausted but wagged his tail weakly. His head and paws were stained with blood.

„You wicked creature!” roared the prince.  „This dog has killed my son!”  and without further ado he drew his dagger and plunged it deep into Gelert’s side. As the dog slumped to the ground, the prince heard a soft whimpering from behind the upturned cradle.

As the dog lay dying, Llewelyn gently picked up his son. Too late, he turned to see the half covered body of a huge wolf lying dead on the floor. Thanks to Gelert, the baby remained unharmed. Filled with remorse, Llelwelyn knelt and gently stroked his faithful friend and Gelert’s tail thumped the ground slowly for the last time.

Gelert’s body was buried outside the castle walls, close to the river. The huge stone slab, inscribed with Gelert’s name, still marks the grave and the village nearby still carries the name ‘Beddgelert’ .